The framework provides engineers the possibility to use the React framework with Native platform capabilities to develop native applications that have full access to platform system APIs. It provides the best set of animation libraries and UI Components with a robust declarative API.

helps create uncommon elements and unexpected motion that animates from a subject in mobile applications. With such advantages, it becomes a common choice among businesses to provide an unparalleled experience to their customers.

Here is a graph showing the growth of React Native. 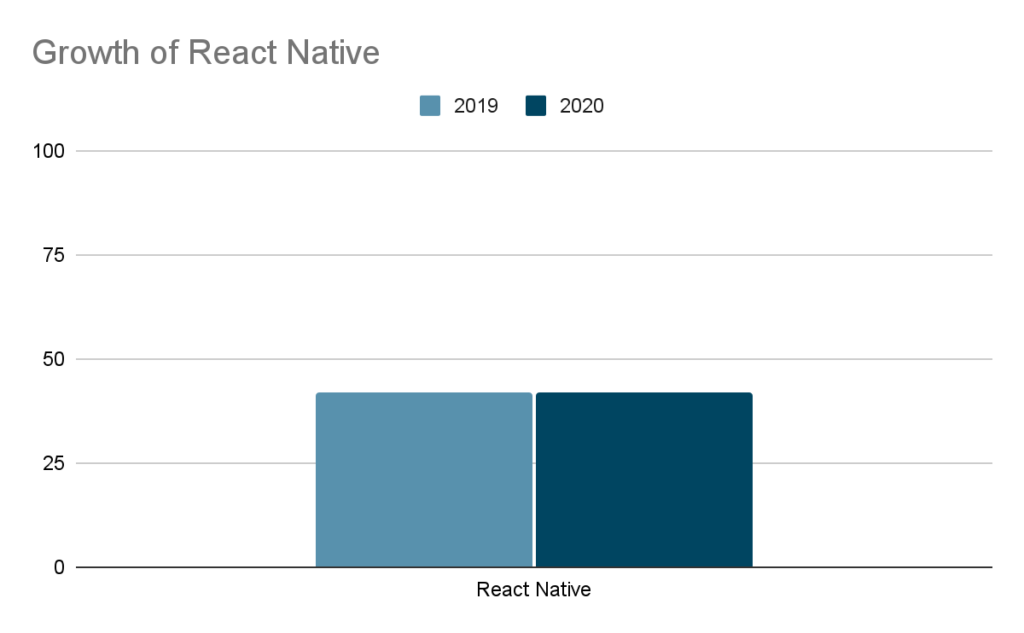 But for a pleasant experience, using React Native in the right way is crucial. And for this, you need to have good knowledge about React components.

What is the Purpose of React Components?

React Native is an excellent framework that encourages developers to build the UI of their application using multiple or isolated components. It allows you to combine React UI libraries with Bit into building blocks that can be synchronized into numerous projects. React Native enables you to work in a distributed development manner that helps easily reuse and share components between apps.

How to Become a Mobile App Developer

NativeBase is an excellent React Native UI Component library for creating apps if you are a newbie. It also has a premium starter kit so that you can better customize the app.

Using this library, a developer can create and maintain a stable design framework that is both web and mobile-oriented. It also supports accessibility with React Native ARIA and the mable design systems, optimized for both light and dark modes, and helps create customized UI elements.

It provides a detailed list of UI Components and advanced elements, like a skeleton, row, column, icons, checkbox, buttons, flex, and overlays.

It’s a cross-platform library for both Android and iOS that consists of UI Components, animations, and themes. All Shoutem components are customizable and composable. It comes with predefined styles that will help you build complex styles.

It is one of the emerging React Native UI Component libraries that enables you to create amazing apps.

With a collection of customized navigation, cards, inputs, and buttons, it is getting the attention of leading developers.

UI Kitten comprises a set of general-purpose UI Components that helps in the customization and reusability of your application. This will enable you to enhance your visual appearance. With this, themes can change in the runtime without any application reloading.

Like NativeBase Developer, Ignite CLI is preferable for beginners to build React Native apps. It contains numerous boilerplate options; you can even use standalone plugins for your app.

Nachos UI has over thirty tailored styles and customizable components, making it very popular among developers. It also works on the web and uses Yarn.

This React Native UI Component library is used when developers need to build a NavBar/ToolBar/TabBar for Android and image sources. It is used in the development of most Android apps because of the unparalleled advantages that it promises.

React Native Paper provides over thirty customizable and production-ready elements aligned with the Material Design rules. It offers complete support for light and dark themes and allows you to move between different themes smoothly.

If you want to build an app with maps, the React Native Maps UI Component library is ideal. It has tailored map elements for both Android and iOS that enable developers to design map style, customize the markers, modify the map view region, and overlay other components as per the requirements.

When it comes to enhancing customer experience and improving their interaction with your mobile app, UI plays a significant role. React Native enables you to create an appealing UI using React Native animation. Since users love to engage better with apps with good animations, businesses in New York are adopting this framework to leverage their business.

The APIs used to create animations in apps are known as the Animated API. There are two complimentary React Native animation systems:

However, you might need a third-party library to monitor and manage animations. Here are some most popular React Native Animation UI Component Libraries of 2022:

React Native UI Component libraries’ primary objective is to help developers create a user-friendly animation and transition in the mobile application. Above are some of the best and top React Native UI Component libraries, out of which most are customizable. These libraries are heavily loaded with excellent in-built features that can help you modify your app as per your business needs.

Are you also thinking of developing a React Native mobile app in New York or transforming your old-school app to this framework? It’s best to consider Torii Studio; they are highly experienced and knowledgeable in creating a seamless experience for your users.

Winter isn’t always considered to be the most fashionable season-best will people follow fashion trends to get noticeable. It’s difficult not to get into the